skip to main | skip to sidebar

"The best market of all is for good drawings of girls." - Andrew Loomis

"The sight of a fine human figure is above all things pleasing to us." - Albrect Dürer

"The head is very important.  But especially important is vivacity - being alive.  It shouldn't be fake but be sprightly and genuine." - Gil Elvgren

"When a woman winks, she winks with her whole body." - Walt Stanchfield

"Whether it is a river, a rock, a mountain, or a pretty girl, the artist at the moment of painting it must feel its very nature; which, by the magic of his brush, he transfers into his work to remain forever, affecting all who see it with the same sensations he experienced while executing it." - Jim Silke

"I'm just expressing what I want to express in my creations, and doing that, I can't be innocent.  I believe the artist's job is to warn society and say, 'Hey, look at what's happening here.'" - Hajime Sorayama

"…the diamond band on the wrist of her naked arm gave her the most feminine of all aspects: the look of being chained."  - Ayn Rand

"There's a problem by definition with fishnets.  The wider the weave, or the broader the weave, the more vulgar the look's going to be...they send a very powerful sexual message." -Tim Gunn

"Gross roundess is characteristic of bad modeling.  The most boring thing is a sphere.  It does not exist in a human figure." - Fred Fixler

"I can't make it up, I have to work from something real, from real flesh and hair and attitude." - Robert A. Maguire

"...if a lady is going to be nice enough to remove her clothes and sit for me, the least I can do is paint her splendidly." - Richard Schmid

"When drawing a pretty girl, she needs to look like a pretty girl right away in your drawing. Making her look pretty later will never work." - Fred Fixler

"Modern art is what happens when painters stop looking at girls and persuade themselves that they have a better idea." - John Ciardi

"The most important part of the character is actually fat.  Any character we create is composed of bones, muscles, and of course fat.  Despite the beauty of bones and muscles, those aspects tend to not be particularly feminine, and lend themselves to something more male.  If you focus more on the fat of a character, and then you sort of create a flow into the chest and the hips and form the body around it, how force and physics can change a body, including fat, it becomes more beautiful for people who can appreciate that innate nature. In books that explain the body, there aren't that many explanations of fat, so it's really hard to find this kind of information actually." - Hyung-Tae Kim

"There's something so wholesome about those pre-plastic surgery era women. I think its a Jungian archtype thing that men are attracted to two different 'sides' of women: the mother and the whore. The mother is the nurturing life giver.  The whore is the sex object. Women today seem all whore and no mother. The 60s seemed to combine the two better. Perfect balance of 'I'm going to fuck you and love you at the same time.'" - Anon

"No one was ever dragged kicking and screaming into a career as a pin-up artist; you do it because you love the subject matter.  So draw what you like." - Adam Hughes

“We live only to discover beauty. All else is a form of waiting.” - Kahlil Gibran

"Everything is exaggerated [in HD]. A blemish can look huge, and it`s impossible to disguise bumps and bruises with makeup, because the makeup stands out as well." - Jesse Jane

At Babe Lab, we realize drawing women isn't an exact science...yet. It's our aim to distill and harness hotness for pinup artists everywhere. Findings are subject to change. 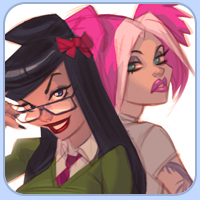 Have a tip, trick or comment you wouldn't mind getting pinned? Write to us!